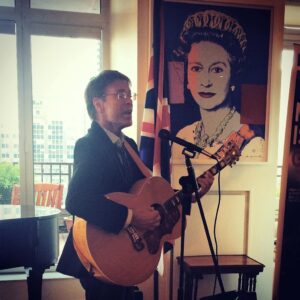 It was a beautiful evening and guests gathered on the balcony of the British Residence for an event celebrating the opening of Wimbledon 2014, with special guest Sir Cliff Richard.  Introduced by HM’s Consul General, Danny Lopez, Sir Cliff was charming, witty and looking handsome in polka dots and stripes. Originally in New York to perform in Brooklyn as Morrissey’s special guest, Sir Cliff told me how disappointed he was not to perform with Moz and that he hoped they could re-schedule in the near future. 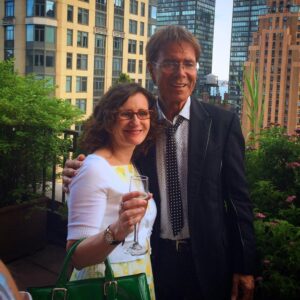 Sir Cliff played 3 songs “Living Doll”, “Move It” and “Congratulations” and all the distinguished guests, dressed in summer and Wimbledon attire, sang along.  I admit I knew all the lyrics!  We were then invited to search the Residence for 10 hidden tennis balls, signed by Sir Cliff.  After his performance, along with other eager attendees, I could be found parting palm leaves, inspecting plant pots and searching nooks and crannies. 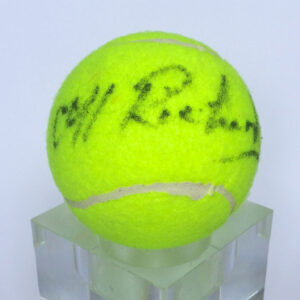 I am now the proud owner of a tennis ball signed by Sir Cliff Richard!